Required cookies are essential to let you move around the website and use its features, such as accessing secure areas, shopping baskets and online billing. These cookies allow our website to provide services at your request.

Functionality cookies are used to remember the choices you make, e.g. your user name, log in details and language preferences. They also remember any customisations you make to the website to give you enhanced, more personal features.

Targeting cookies collect information about your browsing habits to deliver adverts which are more relevant to you and your interests. They also measure the effectiveness of advertising campaigns.

This site uses cookies and related technologies for site operation, analytics and third party advertising purposes as described in our Privacy and Data Processing Policy. You may choose to consent to our use of these technologies, or further manage your preferences. To opt-out of sharing with third parties information related to these technologies, select "Manage Settings" or submit a Do Not Sell My Personal Information request.

Ford SYNC is a state-of-the-art system that enables you to stay connected and control your phone, music and navigation system with natural voice commands. You can even call up a list of local restaurants just by saying "I’m hungry". It can read out your text messages too. The colour touchscreen features

With a range of unique series offerings available – from the sports-inspired styling of New Fiesta ST-Line, premium comfort levels of New Fiesta Titanium, to the rugged outdoor character of New Fiesta Active – you’ll find the perfect New Ford Fiesta to suit you. 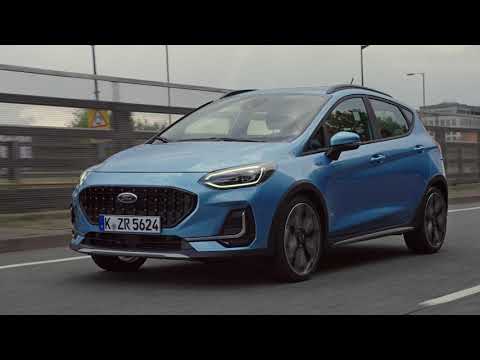 The New Ford Fiesta EcoBoost Mild Hybrid is now available to order with the EcoBoost Hybrid 48-volt technology boosting fuel efficiency by up to almost 5% and further adding to its renowned fun-to-drive performance.

It has also received several great technology upgrades, including the introduction of Adaptive Cruise Control with Stop & Go and Speed Sign Recognition for improved safety, in addition to a FordPass Connect modem which gives occupants a whole new connectivity experience and enables advanced features via the FordPass smartphone app. Read more below for details!

With engines available that generate 125PS or 155PS, the New Fiesta EcoBoost Mild Hybrid models use a belt-driven integrated starter/generator (BISG) instead of a traditional alternator. This means that kinetic energy normally lost during braking and coasting can be recovered and then stored in a 48-volt lithium-ion battery pack.

The intelligent, self-regulating mild-hybrid system calculates whether to use ‘torque substitution’ (to generate up to 24 Nm of torque for improving fuel efficiency, reduce the strain on the petrol engine and lower emissions) or ‘torque supplementation’ (to increase the peak torque available by up to 20 Nm).

Using the BISG has also allowed engineers to add a larger turbocharger by mitigating turbo-lag.

Find Out MoreBook A Test Drive

One of the automotive industry’s most popular and best-selling hatchbacks is back and better than ever before. The all-new Ford Fiesta comes with a fresh exterior design that exudes style and quality, while the cabin delivers the utmost in comfort and an all-new interactive digital instrument cluster on selected models. With a range of distinctive trim levels available - including ST-Line, Titanium, Active and more - there’s certain to be an edition that matches your demands.

On the inside, the new Fiesta delivers premium quality at all times. From the plush upholstery to the ample dimensions, every inch of this iconic model is crafted to perfection.

Discover more about the new Ford Fiesta by liaising with a member of the Ford team today. You can schedule a test drive for a time that is convenient and find out more about the promotions and special offers available across the range.

Next
Prev
Gen-3 Glasscoat Delivering consistent protection in the harshest of environments Find Out More
Club SmartGuard Providing high quality cosmetic repairs at a location that suits you Find Out More
Service Plans Keep a tight grip on costs with service plans from less than £1 a day Find Out More
Book a Service Online Book Today
Find Us Our Dealerships
Latest News Find out our latest news here at AMG. Find Out More
Gallery
Company Info
Back to Top
Reg Office: Tachbrook Park Drive Warwick Warwickshire CV34 6SY
Reg. Company Number: 04782818
VAT Reg. No. 203 1428 62
Allen Ford UK Limited are a credit broker and not a lender. We are Authorised and Regulated by the Financial Conduct Authority. FCA No: 710890 Finance is Subject to status. Other offers may be available but cannot be used in conjunction with this offer. We work with a number of carefully selected credit providers who may be able to offer you finance for your purchase. We do not charge you a fee. Whichever lender we introduce you to, we will typically receive commission from them (either a fixed fee or a fixed percentage of the amount you borrow). The lenders we work with could pay us commission at different rates. The amount of commission we receive does not affect the amount that you pay under your credit agreement. A customer may ask for commission disclosure at any time from our initial discussions through to the point when their agreement is set live.
Registered in England & Wales: 04782818
Registered Office: Address: Allen Ford- Warwick, Tachbrook Park Drive, Warwick, CV34 6SY
Data Protection No: Z9340106
Back
Vehicle Valuation
Compare Saved Vehicles
Top
Close